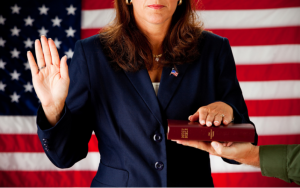 Did you listen to or watch Dr. Christine Ford’s testimony in the Senate hearings for Brett Kavanaugh’s nomination to the Supreme Court? We all know how that turned out, but do men in power realize what a galvanizing moment that was, even for the most complacent suburban woman? Time Magazine described it well:

…for ordinary women around the country, it was a moment to listen to a woman, just like them, as she sat before a mostly male Senate committee to relive the most traumatizing experience in her life. …Women listened in the privacy of their homes and texted each other. Women watched by themselves at home and with supportive friends. They watched from their desks, or sitting in break rooms with C-SPAN streaming, or sitting in parked cars, missing their appointments. They listened on buses and on subways. Traders on the floor of the New York Stock Exchange were streaming the testimony, their eyes glued to Dr. Ford’s terrified face instead of screens full of numbers. A Zen Buddhist monk broke her weeklong silent meditation to watch and live-tweet the hearings.

In my blog, I write about women speakers and how effective they are in communicating a big idea or taking a position. I’ve always assumed that in the year 2018, speakers are usually addressing rational people who can keep their biases under check. Does it matter how well prepared you are- even with great presence, accurate data in hand, and truthful- when the deck is stacked against you? I say this because Dr. Ford was all of that and more and yet the hearings proved to be a test of Dr. Ford’s credibility and not of Brett Kavanaugh’s.

When Dr. Ford stated under oath that she was 100% sure her assault involved Brett Kavanaugh, she was either not believed at all or only half-believed.  Many pinned their hopes on mild-mannered Senator Susan Collins who said she believed half of what Dr. Ford said – that some kind of assault did happen – but the more important half led her to believe Kavanaugh’s version of the incident. Dr. Ford was sincere, authentic, and precise in her sworn testimony, but in the long run, what she said didn’t matter.

If you have studied women’s history, you know that when women speak truth to power, their speech is often the subject of mockery. Starting with Aristotle and Plato, historians confirm the power of stereotypes about women: that they gossip, whine, and are full of guile. When women pointed out injustices, they were often called liars or branded as manipulators. Women’s complaints were trivialized, dismissed as idle chatter. They were also seen as intellectually inferior to men and easily confused. The attitude of Republican senators during Dr. Ford’s testimony showed that these antiquated notions are still alive and well in the present day. Given that Dr. Ford is a proven intellectual with a scholarly track record of publishing research in academic journals, how absurd is that?

Twenty-seven years ago, people were riveted by the spectacle when law professor Anita Hill walked into a Senate hearing room to testify about sexual harassment she had faced from Supreme Court nominee Clarence Thomas. She was ridiculed and castigated for her sworn testimony. For us, the Kavanaugh hearings was Déjà Vu and it was painful to watch.

Sexism remains a reality. Even a woman with graduate degrees and professional awards who challenges the establishment will not necessarily be seen as a credible witness. Rather, if a woman decides to assert her authority in presenting evidence, she needs to be aware of the risks involved (for example, Dr. Ford’s life was threatened and she and her family had to move out of their home).

Would you take the risk of speaking up when you know in advance that  your audience is going to be skeptical at best, and hostile at worst? Why would you? Perhaps when you know it’s the right thing to do and you couldn’t live with yourself if you kept silent. Here are 5 suggestions to help you prepare yourself to show up both mentally and emotionally for a difficult presentation:

Be realistic about the outcome. Don’t expect your presentation to necessarily lead to the desired success as you define it.

Some good might come out of the Kavanaugh hearings, given the context to include the impact of #METOO, #TIMESUP, and the increased number of Corporate Gender Initiatives. Along with the resulting suspicions about the present administration’s integrity and the groundswell of support for Dr. Ford mounting, there is momentum building to support women’s advancement into political leadership positions. Even now we see more than twice as many women running for Congress in 2018 versus 2016. The list includes doctors, scientists, and engineers, people who were previously apolitical. Women moved the needle in the mid-term elections, but can they thread the needle? It’s one thing to get elected, it’s another to stay elected.

If you want to see a more equitable future created, join with others who want to be “seen and heard!” Together, our voices will create a sonic boom and that’s what we need to shatter the glass ceiling.