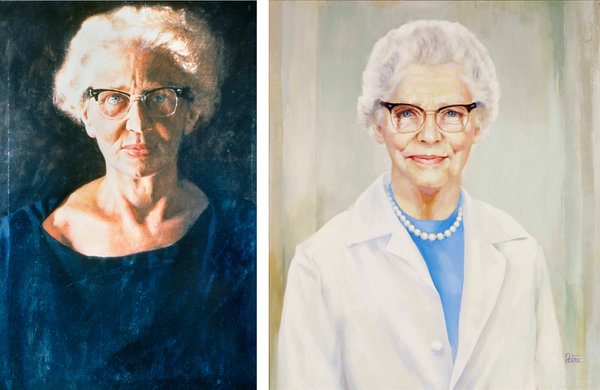 What would you do if a commissioned portrait didn’t look like you, or at least, not the way you thought you looked? A wonderful article about Jamie Wyeth’s controversial portrait of Cardiac Pioneer Dr. Helen Brooke Taussig makes me think about the issue of one’s image and how women want and need to control one’s image. Today we call it “impression management.” http://www.nytimes.com/2013/08/18/arts/design/a-showing-for-jamie-wyeths-portrait-of-a-cardiac-pioneer.html?pagewanted=all&_r=0)

Dr. Helen Brooke Taussig, the subject of Wyeth’s 1961 portrait, was well respected for her work, having imagined a way to save the lives of “blue babies” by increasing the delivery of blood to their lungs. Her discover ushered in the era of cardiac surgery, something we take for granted today. A group of doctors who worked and studied under Dr. Taussig had commissioned the painting by Jamie Wyeth in the hope of hanging her portrait at the hospital next to those of other Hopkins luminaries — all of them men. It never happened. They hated the result and decided to instead present Dr. Taussig with it as a personal gift. Is the story about personal taste, vanity or the dilemmas that women professionals face, even fifty years later?

Wyeth painted the gifted pediatric cardiologist as the intense personality that she was, staring confidently at the viewer. Her sweater was draped over one shoulder with full lips and tousled hair. No glasses or white coat in this unconventional portrait, which led some colleagues to say that she looked more like a witch and less like a scientist. But Wyeth had wanted to depict his subject the way he saw her rather than how others, perhaps even the camera, might see her.

The history of Dr. Taussig’s painting is also the story of the changing image of professional women. Dr. Janice E. Clements, a professor who specializes in neurovirology at the Johns Hopkins School of Medicine said:

“In the 1960s, our view of women was very different. Those who saw a kindly, nurturing doctor wanted that side of her in a portrait….The portrait of a determined woman…is a more modern concept.”

To succeed in the male-dominated world of medicine at that time, the reality was that a woman had to be tough and competent, and yet, Wyeth found (and depicted) the authentic, human side of the doctor from spending quality time with her and getting to know who she was as a dimensional person. What he captured on the canvas was not a two-dimensional stereotypical image of a doctor in a white coat but rather, a flesh-and-blood woman. Alas, both the doctors who commissioned the portrait and Dr. Taussig were horrified by the result.

The story is worth telling to professional women whose image matters to them as well as to their colleagues. After all, one’s professional image should convey the values of the profession —whether medicine, law, engineering, architecture, or teaching— while conveying the subject’s confidence in her (or his) competence.

Even today, how to present oneself as outstanding, intellectual, hard-driving, and determined puts a woman into a double bind position. After all, women are supposed to mediate their presence so as not to take up too much space, be modest about their intellect, and be flexible rather than determined, in Taussig’s case, determined to solve a monumental problem: saving newborn babies’ lives. Women are not expected to be groundbreaking thought leaders who transform how things are done, as Dr. Taussig did. The same doctor who transformed heart surgery had to be immortalized as kindly and nurturing rather than as the tough-minded, determined genius that she was.

Women today know that image and presentation is important in today’s competitive world. And women tend to be self-critical when it comes to their appearance; it’s difficult to produce a photo that a woman over 40 will like. Dr. Taussig rejected Wyeth’s image of her and stowed his painting away in a closet until her death 23 years later. After she died, it was relegated to an anteroom at Johns Hopkins Medical Center where few could see it. Finally, a new portrait was commissioned and hanged in 1981, showing Dr. Taussig as modest, kindly, and nurturing in a white coat, smiling, looking like anyone’s grandmother.

Perhaps some day your professional success will lead you or your family, your company, Board, institution, or association to commission a professional portrait. A good portrait painter or professional photographer will want to get to know you as a whole person, watching you eat, sleep, walk around, and think. Are you willing to live with and appreciate what he or she produces, even it’s not the image you expected? Ask yourself: What image do I want to convey: kindly and nurturing, or tough-minded and determined, or perhaps both?